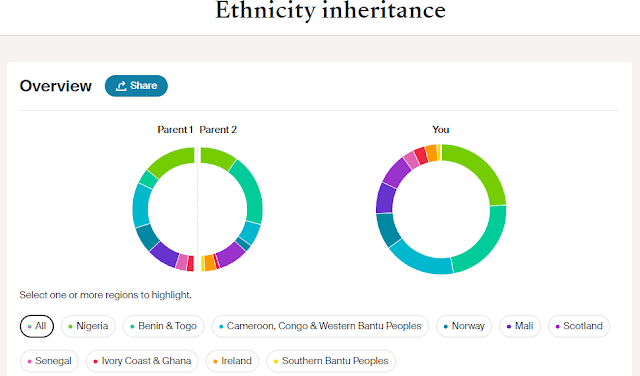 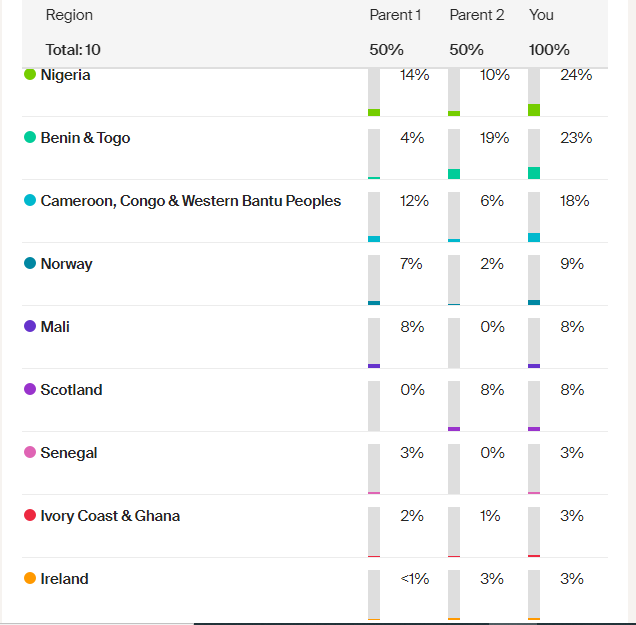 So as of now I'm leaning toward Parent 1 as my father and Parent 2 as my mother. Yes, the sampling of DNA cousins I looked at is small and yes, I only get a glimpse of 50% of each parents DNA -- but I am not a science nor math person and it was all head-spinning for me. Overall, it was an interesting parlor game, but as it stands now I don't see how it really matters which parent contributed which of the 50% DNA I inherited. And for me, the paper trail is still more interesting.
Copyright © 2022 by Sandra Williams Bush, Ancestor Callings: Georgia and Mississippi Roots. All Rights Reserved.
Posted by Sandra Williams Bush at 3:46 PM No comments:

Email ThisBlogThis!Share to TwitterShare to FacebookShare to Pinterest
Labels: DNA 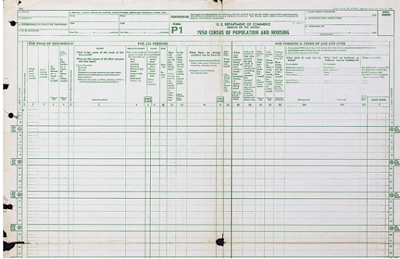 The 1950 U.S. census was released on April 1, 2022. There has been so much hype about its release, especially in the past month -- on the date of the release, there were even virtual parties during the "midnight hour".
I wasn't excited about it at all, and I attended one webinar that left me so confused. But by the evening of April 1st, curiosity got the best of me, so I found myself taking a look at the Ancestry.com site and National Archives site. Both had prominent link assistance on their home pages for the 1950 census. To me, it seemed that Ancestry wasn't quite ready for the release (see image below). I found the National Archives site much easier to work with because I didn't have to figure out an enumeration district. There were other major sites that had assistance on their landing pages but since I was overwhelmed with all the hype, I just concentrated on the two sites I mentioned.
I already knew who I primarily wanted to find in the 1950 census: my parents, Willis B. Williams and Evelyn O. Brown; my maternal grandmother, Lucy Brown; my mother's siblings; my father's grandmother, Mary Lane Button; and my father's siblings.
I didn't like that I had to have an address to find the enumeration district (ED) on Ancestry. The whole point of my looking at the 1950 census was to find out where family lived. 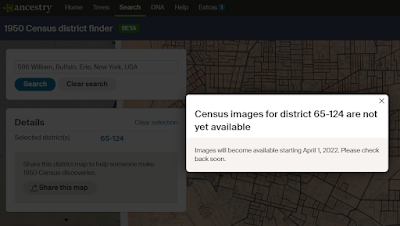 Image from Ancestry.com on 1 April 2022 at 8:06pm
National Archives site
I liked that I could put in name, city/county, and state on the National Archives site. However, I didn't have much hope in finding m Brown family because it's such a common name.
MY MOTHER'S FAMILY
I was so happy that my maternal grandmother, Lucy Brown, and her children were the first "hit" when I did the search on Archives.com

In the top image, my grandmother, Lucy Brown, 46, is listed as a widow, living at 586 William St., Buffalo, Erie, New York. Living with her are all her children -- daughter, Verlie, 25, a registered nurse, employed in private duty; son Arthur, 23, a presser at a tailor shop; daughter Vivian, 21, a college student; and daughter Evelyn (my mother), a waitress in a cafeteria.
The second image is from the bottom of the census page. Sample #4 from the supplemental questions is my Auntie Vivian.
Maternal grandfather, Noah Brown and his sister, Ida Brown living in Cleveland Ohio was a surprise. I initially looked for Noah in Buffalo NY and then looked at Cleveland because that was his place of death in 1966. Interesting that Noah is listed as widowed (as is my grandmother in Buffalo NY). My happy surprise was finding my great-aunt Ida because I haven't been able to find much information on her as an adult.

1950 U.S. census, Cleveland, Cuyahoga County, OH, ED 92-897, sheet 6, household 61, lines 17-18 (Noah Brown and sister Ida Brown); U.S. National Archives,_1950 Census_(https://1950census.archives.gov/search/).
Also in the household is Jordan, *unknown*, number 19 with "SEE NOTE" which is at top of census form.
MY FATHER'S FAMILY
Richard L. Davenport and Anna M. Davenport raised my father, Willis B. Williams and his sister, Joan Williams, when their mother passed in 1941. Anna M. Davenport (Button) was one of his mother's sisters. In this record, my father isn't listed because he's in the Army from 1949-1951 during the Korean Conflict. However, his sister, Joan, age 19 is listed. They live at 209 Walnut Street in Buffalo NY.

1950 U.S. census, Buffalo, Erie County, NY, ED 65-150, sheet 1, household 7, lines 22-24 (Richard Davenport family); U.S. National Archives,_1950 Census_(https://1950census.archives.gov/search/).
In 1950 my father's grandmother, Mary Button, was living in Detroit Michigan, with a daughter, Verna and son-in-law, Robert Bynum. Finding my great-grandmother was another guessing game because at the time of her death in 1955 she was living in Buffalo NY with her daughter and son-in-law, Anna M.  and Richard Davenport.

1950 U.S. census, Detroit, Wayne County, MI, ED 85-1072, sheet 3, household 18, lines 25-29 (Robert Bynum family); U.S. National Archives,_1950 Census_(https://1950census.archives.gov/search/).
I am pleased with the family I have found. However, I did not find my father's siblings in Detroit, Michigan. Their surname is Burkett. I only got one hit on that name, followed by pages and pages with various name spellings. So finding them will be a search for another day.
Copyright © 2022 by Sandra Williams Bush, Ancestor Callings: Georgia and Mississippi Roots. All Rights Reserved.
Posted by Sandra Williams Bush at 3:27 PM No comments:

I am the oldest of my siblings and the only girl. Growing up, I was sometimes in places where my brothers weren't, hearing snatches of adult conversations. One of the whispers I heard was that in my mother's paternal family there were two aunts -- sisters -- who were "crazy" and died in a mental institution. Of course, as a child I never questioned or spoke of it but there was a cloud over that branch of the family and by extension me.
I mentioned my questions and the whispers briefly in an earlier post Brown Family Secrets
So, after decades of wondering if my great aunts were admitted to the Massillon State Hospital for mental illness, I finally got the answer -- thanks to a genealogy angel.
I belong to several genealogy groups in the areas where my ancestors lived. In a monthly meeting of one group, a member stated that she would be willing to help anyone with Ohio research -- my antenna went up and I made note of her contact information. When I reached out to her, she was helpful beyond measure!
This is what I have known about my great aunts (sisters of my maternal grandfather, Noah Brown)
Luella Brown Berry was born 30 Jan 1888 in Mississippi, married William Erza Berry about 1905 in Simpson County, Mississippi. She died 17 Aug 1928 in Massillon State Hospital of TB.
Fannie Brown McCall was born Feb 1890 in Simpson County, Mississippi, married Horace McCall on 21 Aug 1919 in Cuyahoga County, Ohio.  She died 23 Jun 1926 in Massillon State Hospital of TB.
My question:
Did they go into the hospital as mental patients or TB patients?
The answer for my great aunt Luella is in her hospital Admittance Card. Written under CONDITION AND TERMS is "M. DiDep?" CAUSE Unknown. The term seems to be some type of dissociative disorder (using Google as my guide). 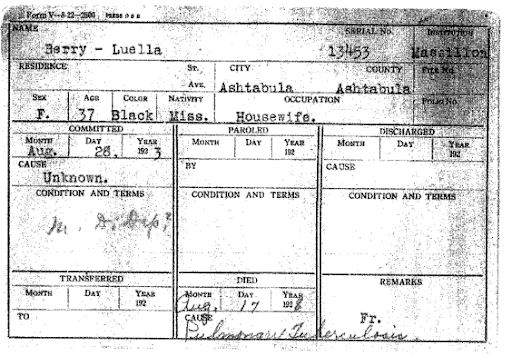 Luella Brown Berry was committed to the Massillon State Hospital in Massillon, Ohio on 28 August 1923. She was 37 years old, a housewife and her residence listed is Ashtabula, Ashtabula, Ohio. She was institutionalized just under five years before she died of pulmonary tuberculosis on 17 August 1928.
On the back of the card are the names and addresses of family: William E. Berry, husband, with a Rossford, Ohio address; and Noah Brown, brother. There is an additional notation to address all correspondence to her brother. Her mother, Mary Brown's name and address are crossed out along with the notation that she died April 25, 1925. 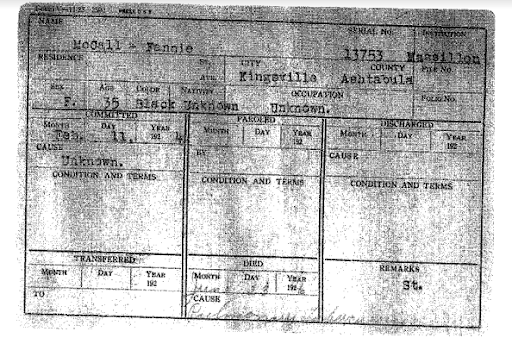 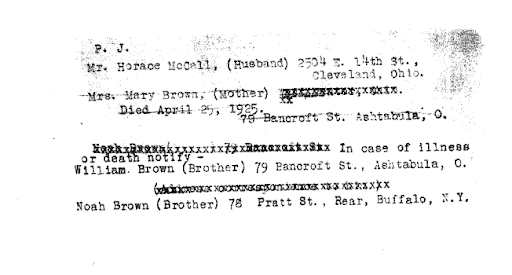 Fannie Brown McCall was committed to the Massillon State Hospital in Massillon, Ohio on 11 February 1924. She was 35 years old, and her residence is listed as Kingsville, Ashtabula, Ohio. She was institutionalized for two years and four months before she died of pulmonary tuberculosis on 23 June 1926. CONDITION AND TERMS box is left blank, CAUSE Unknown
On the back of the card are the names and addresses of family: Horace McCall, husband, with a Cleveland, Ohio address; and brothers, William Brown and Noah Brown. There is an additional notation to contact the brothers in case of illness or death. Her mother, Mary Brown's name and address are crossed out along with the notation that she died April 25, 1925. 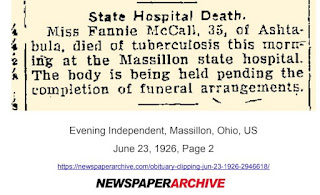 The information from the hospital files, led me to reach out to the Massillon Public Library and I was sent the death notice of Fannie McCall from the local paper. The email with the death notice included a brief message: "The Massillon State Hospital was a statewide facility for tuberculosis patients and mentally handicapped at that time. All deaths were reported in the Massillon newspaper regardless of the hometown of the patient, but not a true obituary."
It took a few days for me to process the information that I received on the hospital Admission Cards. When I did, I was overcome with sadness -- and more questions. What was the behavior that led to my great aunts being committed? What was the treatment and how were they treated during their time in the facility? Why were their brothers listed as the contacts and not their husbands? Did their family visit them or were they put away and forgotten? They are both buried in the Massillon Cemetery -- did they have a funeral service?
I had taken an extended break from researching my great aunts when I received their death certificates a few years ago that listed the Massillon State Hospital as the place where they died, even though I had questions on why they were there. I am torn about this post, but I feel someone will need to know. Although they died decades before I was born, Aunt Luella and Aunt Fannie will forever have a place in my heart.

Sandra Williams Bush
I am a retired librarian (30 years & out!). My interest in genealogy is coupled with my interest in African American history. My family history nudge began when my mother expressed an interest in knowing more about her family. As my blog subtitle suggests my roots are in Georgia (paternal) and Mississippi (maternal). This is my genealogy journey as I research my family history and my genealogy roots in America with the hope of breaking through the enslavement period.